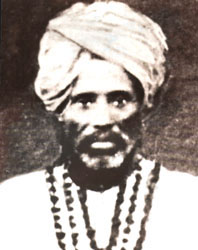 After receiving the initiation from his master Param Mahasiddha Avatar Sri Alakhpuriji, Paramyogeshwar Sri Devpuriji followed his divine will and left the Himalayas to later (in the 19th century) establish a small ashram in the desert village of Kailash (named after Mount Kailash, the abode of Lord Shiva, and the one peak in the Himalayan range that stands above all others as the ultimate sacred mountain), in the Sikar District in the Indian State of Rajasthan.

Paramyogeshwar Sri Devpuriji is revered as an incarnation of Lord Shiva. He embodies all characteristics of Lord Shiva - Shiva is the saviour, the destroyer of bad and evil. Shiva is consciousness, purity and fire. Paramyogeshwar Sri Devpuriji is the giver of spiritual power, an incarnation of Divine Will and he represents the yogic consciousness. It was Lord Shiva who brought the wisdom of yoga to humanity. Sri Devpuriji is the Supreme, a mighty channel who bestows Light and Cosmic energy upon the earth. All the elements were under his control. It has been reported by eye-witnesses that he walked on water and could materialize or de-materialize his body according to his will. He directed fire and rain just as he wanted and wherever he went there remained no footprints on the ground. No material or astral power could hinder Sri Devpuriji; at any time he was able to come, protect and support his bhaktas.

Sri Devpuriji was like Lord Shiva, indeed - he could be immensely merciful but also very strict too. But even when Sri Devpuriji was angry, people felt blessed because God is never angry with us, only with our bad qualities. In his ashram at Kailash he held numerous wonderful satsangs (spiritual gatherings) which attracted people from all over India. So great was Sri Devpuriji's love for animals that he was constantly followed by a flock of cows, goats, birds, dogs, and snakes. When he held satsang, even the creatures of the jungle came out to listen to his words.

Sri Devpuriji left his physical form in 1942, and he passed on his spiritual blessings to one of the most divine incarnations of mankind, the Avatar, all knowing Siddha, Bhagwan Sri Deep Narayan Mahaprabhuji, an embodiment of Divine Love, Wisdom and Light, who lived from 1828 to 1963 in Rajasthan.

The relationship between Sri Devpuriji and Bhagwan Sri Deep Narayan Mahaprabhuji was one of great unity and love. They were "two in body, but one in Atma". Sri Mahaprabhuji expressed his devotion towards his master in numerous poetic spiritual songs (bhajans). They describe the highest aim of yoga, the union with the omnipresent, eternal and divine Self.