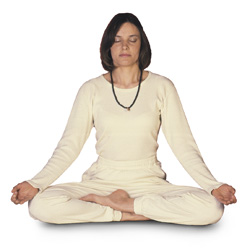 In a small but highly provocative study, a Universty of Wisconsin - Madison (UW-Madison), USA, research team has found, for the first time, that a short program in "mindfulness meditation" produced lasting positive changes in both the brain and the function of the immune system.

The findings suggest that meditation, long promoted as a technique to reduce anxiety and stress, might produce important biological effects that improve a person's resiliency.

Richard Davidson, Vilas Professor of psychology and psychiatry at UW-Madison, led the research team. The study, conducted at the biotechnology company Promega near Madison, will appear in an upcoming issue of the journal Psychosomatic Medicine.

"Mindfulness meditation," often recommended as an antidote to the stress and pain of chronic disease, is a practice designed to focus one's attention intensely on the moment, noting thoughts and feelings as they occur but refraining from judging or acting on those thoughts and feelings. The intent is to deepen awareness of the present, develop skills of focused attention, and cultivate positive emotions such as compassion.

In the UW study, participants were randomly assigned to one of two groups. The experimental group, with 25 subjects, received training in mindfulness meditation from one of its most noted adherents, Jon Kabat-Zinn, (Kabat-Zinn, a popular author of books on stress reduction, developed the mindfulness-based stress reduction program at the University of Massachusetts Medical Center.) This group attended a weekly class and one seven-hour retreat during the study; they also were assigned home practice for an hour a day, six days a week. The 16 members of the control group did not receive meditation training until after the study was completed.

For each group, in addition to asking the participants to assess how they felt, the research team measured electrical activity in the frontal part of the brain, an area specialized for certain kinds of emotion. Earlier research has shown that, in people who are generally positive and optimistic and during times of positive emotion, the left side of this frontal area becomes more active than the right side does.

The findings confirmed the researchers' hypothesis: the meditation group showed an increase of activation in the left-side part of the frontal region. This suggests that the meditation itself produced more activity in this region of the brain. This activity is associated with lower anxiety and a more positive emotional state.

The research team also tested whether the meditation group had better immune function than the control group did. All the study participants got a flu vaccine at the end of the eight-week meditation group. Then, at four and eight weeks after vaccine administration, both groups had blood tests to measure the level of antibodies they had produced against the flu vaccine. While both groups (as expected) had developed increased antibodies, the meditation group had a significantly larger increase than the controls, at both four and eight weeks after receiving the vaccine.

"Although our study is preliminary and more research clearly is warranted," said Davidson, "we are very encouraged by these results. The Promega employees who took part have given us a wonderful opportunity to demonstrate a real biological impact of this ancient practice."

Davidson plans further research on the impact of meditation. He is currently studying a group of people who have been using meditation for more than 30 years. His research team is also planning to study the impact of mindfulness meditation on patients with particular illnesses.