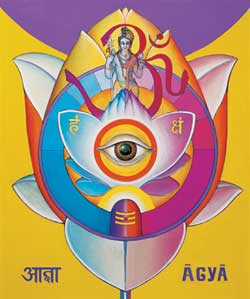 The Agya Chakra is situated in the middle of the forehead, between the eyebrows. For this reason it is also known as the “third eye”. The Agya Chakra is the centre of clarity and wisdom. It forms the boundary between human and Divine consciousness. It is the meeting point of the three principle Nadis, Ida (Moon Nadi), Pingala (Sun Nadi) and Sushumna (Central Nadi). When the energy of these three Nadis unites here and rises further, we attain Samadhi, Supreme Consciousness.

Its Mantra is OM. The colour of Agya is white. Its element is the element of the mind, Anupada Tattva. Its symbol is a white Shiva Lingam, representative of creative consciousness. In this and all subsequent Chakras, there are no animal symbols. At this level, only pure, human and Divine qualities exist.

In the symbolic picture of the Agya Chakra there is a Lotus with two petals, indicating that at this level of consciousness there exists “only two”, Atma (Self ) and Paramatma(God). The Divinities of Agya Chakra are Shiva and Shakti united in one form. This means that in the Agya Chakra consciousness and Nature are already united, but have still not merged into total unity.

The qualities of this Chakra are unity (Ekata), emptiness (Shunya), truth (Sat), Consciousness (Chitt) and bliss (Ananda). The “eye of knowledge” opens within and we see the reality of the Self - hence the term “third eye”, which is an attribute of Lord Shiva. The Agya Chakra is the seat of the “inner Master”. It indicates that wisdom and knowledge are realised in all actions. The egocentric intellect has surrendered to the higher, ethical, reasoning power of discrimination (Viveka). However a blockage in this Chakra has the opposite effect, diminishing one’s power of contemplation and discrimination, resulting in confusion.

All Photos Are Copyright Protected: The Owner International Sri Deep Madhavananda Ashram Fellowship / Yoga in Daily Life® - International. All rights reserved. Any unauthorized use is prohibited by law.