News from Yoga in Daily Life in Croatia

This year we are celebrating 10 years of the 'Yoga in Daily Life for Seniors' program in Croatia. The program has been free of charge from the beginning and has served approximately 500 senior practitioners over the decade.

Specially adapted for the elderly, the program began in September 2006 as a part of a project with the Trešnjevka Center for Gerontology in Zagreb. Alen Minić, project manager of the Gerontology Centre, with a masters degree in Social Welfare and qualified teacher of Yoga in Daily Life, founded the free program for seniors.

From the very beginning, large numbers of retirees and seniors have been attending the yoga classes with a great enthusiasm. Alen participated with them at numerous festivals for the elderly, as well as at sports and recreational events with groups of retirees, promoting yoga and active lifestyle into old age.

Yoga for Seniors has successfully expanded to other cities in Croatia, so that today Yoga for Seniors, under the guidance of Yoga in Daily Life teachers, is being practiced by seniors throughout Croatia. Yoga is very well accepted not only by elderly citizens in Zagreb, but also in Rijeka, Novigrad, Poreč, Karlovac, Samobor and Varaždin.

There are currently more than five hundred participants included in the program who, by regular exercise of Yoga in Daily Life, continue to live actively after retirement, thus retaining their vitality and health into old age.

The oldest practitioners of Yoga for Seniors programs are often people who are older than 85, and their medical check-ups become minimized, because regular practicing of yoga, despite their advanced age, enables them to live healthily and keep a positive attitude towards life. Therefore, senior participants await each yoga class with great joy, and many are actively involved in other activities with Yoga in Daily Life.

Yoga in Daily Life Zagreb has participated in a public health campaign titled 'Tearing down the Stigma', launched on the occasion of International Mental Health Day and organized by students of the Faculty of Pharmacy and Biochemistry at Zagreb University. The campaign aims to promote awareness of mental illnesses and disorders, as well as provide information about prevention and assistance.

On 8 October 2016, many activities were organized for the campaign in Zagreb's largest and oldest park - Maksimir Park - and the yoga exercises aroused interest among participants.

Yoga is certainly the best prevention for many diseases and disorders, and practicing Yoga has a therapeutic effect by reducing stress and preventing and decreasing anxiety and depression, as well as many other mental disorders.

Despite cool autumn temperatures, the brave participants had an opportunity to enjoy a Yoga in Daily Life class in nature, surrounded by the woods and clean air of the park.

MM Swami Vivekpuri has been invited, for the third year in a row, to hold two guest lectures at the Faculty of Philosophy at Zagreb University.

The talks were requested to be within the subject of 'Far East sports culture', so he took the opportunity to present the basic terms and principles of yoga to the university students.

The first lecture was dedicated to explanation of the term Sat Sanatan Dharma - the eternal spiritual culture - and its demystification, by understanding its ancient tradition and symbols.

The second lecture was dedicated to a fuller understanding of the term Yoga and explaining its positive effects on the whole human being, leading to the aquisition of physical, mental, social and spiritual health. 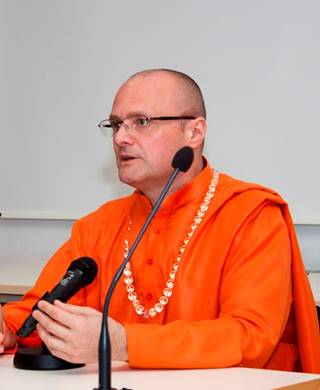