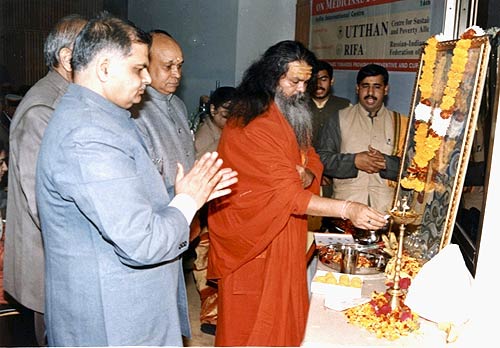 The conference was held at the prestigious India International Centre, New Delhi and was well attended by prominent delegates from 15 different countries.

President of the Utthan Centre and chief organiser of the conference, Dr. D.N. Tewari, gave the opening speech, acknowledging Ayurved as three dimensional system of health: physical, mental & spiritual and described its wholistic effectiveness in today's modern world for de-stressing and detoxifying.

Dr. Tewari stated that 85% of Indians are micro-nutrient deficient and that Ayurved can most certainly address that staggering statistic. Dr. Tewari further said that Ayurved has gained much international recognition and that 3 lakhs people visited India last year to undertake Pancha Karma therapy. The popularity of this system of health care is due to its supreme effectiveness, low cost and the fact that it is easily accessible.

On the subject of medicinal plants, Dr. Tewari said that tyey are in short supply, as there must be stringent control of plants used for medicinal purposes. There must be qualitative control of the plant's purity, safety and efficiacy, and to this end there should be an open sharing of knkowledge between nations.

Dr. Tewari spoke of the importance of Ayurved in veterinary science,as this health system is not only for the benefit of humans,but animals too. Dr. Tewari acknowledged the medicinal plants that Swami MaheshwaranandaJi is growing at his Ashram in Jadan (Pali district, Rajasthan) and how Swamiji is consistently promoting awareness of Ayurved.

The aim of the conference, Dr. Tewari said, was unity and sharing of knowledge.

Swamiji said that all beings desire lasting happiness ant that every being is happiest when they possess good health so that they can enjoy God's creation.

Swamiji shared that through his own meditations it was revealed that the healing power in vegetation (plants) was previously existent in mantras. Even today the healing power of words, of mantras can be seen. This shakti, this power, was transferred into Prakruti (nature) and in this way the plants were imbibed with healing power. Swamiji also said that the healing shakti of the plant works in combination with the spiritual energy of the Ayurved Physician.

Swamiji further remarked that Ayurved is indeed the best system of medicine for both humans and animals, but that the plants used must be grown in their original environment in order to retain their quality and effectiveness.

On the subject of health, Swamiji said that when we eat too much, we cannot properly digest the food which creates an imbalance in our health. Likewise when we think too much we also cannot properly digest the thoughts and so we create a mental imbalance. In both cases Yoga can assist, since Yoga is not only Asanas, Pranayam etc. but Yoga is the presiding principle that balances the entire universe. All planets, stars, moon, sun systems are governed by one Cosmic Power, and that is known as Yoga.

In summary, Swamiji said that only when we return to a natural way of life and live in harmony with nature, the human race will achieve lasting world peace and live with tolerance and respect for all cultures, traditions and nations.

Chief Minister of Himachal Pradesh, Prof. Prem Kumar Dhumal, spoke that after many years of being enslaved by other schools of thought, India is now re-awakening to Ayurved and that it is fast gaining respectability. He said that Himachal Pradesh is the only state in India to fully integrate Ayurved and Allopathic medicine in its health system. Prof. Dhumal said that there is great potential for the joint venture of tourism and Ayurved, by providing Panch Karma facilities to meet the ever growing demand for this therapy.

On the subject of medicinal plants, the Chief Minister said that it is imperative for the herbs to be cultivated in their specific regions. He further said that there is no need to carry out tests on animals to determine toxicity or effectiveness.

Ms. Malti Sinha, Secretary of ISM&H quoted statistics from WHO (World Health Organisation), which estimates that 80% of the population rely on traditional medicine from plants. She also said that 50% of the population of the USA have tried alternative systems of health care at least once. Ms. Sinha expounded the absolute necessity to protect the huge resource of living plants, of which some 45,000 species have been identified – 15, 000 of them currently used for medicinal purposes.

Other esteemed speakers presented at the conference, each bringing with them valuable knowledge on Ayurved. Of these esteemed personalities was Dr. Adrianna Pohlmann from Adelaide, Australia, a highly knoledgeable Ayurved physician and propagator of this system of health care, and Claudia Matejoski from Vienna, Austria.

It is difficult to find a more enthusiastic proponent of Ayurved outside of India than Dr. Pohlmann, who has lectured on this subject in Europe, IOndia and Australia. Dr. Pohlmann brought the delegation's awareness for the need to focus not only on research to prove the success of Ayurved, but to simply continue to promote its great accomplishments in the actual field of treating ill-health & disease.

To demomstrate how this is possible, Dr. Pohlmann expounded the accomplishments of Yoga, as spread by Paramhans Swami MaheshwaranandaJi in the establishment of 5000 Yoga in Daily Life centres worldwide. She said that just as Yoga has conquered the world, so too can Ayurved, as a wholistic health system for all populations!

One of India's great celebrities, Ms. Shanaz Husain, briefly graced the conference with her presence, as she is a great supporter of Ayurved, having based her entire career of natural beauty therapy on the use of medicinal plants. She shared some personal stories on the use of Ayurved in curing several people of conditions which were given-up on by allopathic medicos. Ms. Husain has built a successful empire of natural cosmetics and health care from the healing power of Ayurved.

The day-long conference was closed with a valedictory address by the Vice President of India, the Honorable Shri Bhairon Singh Shekhawat Ji, presided over Shri Shanta Kumar, Minister of Rural Development, Govt. of India, who thanked the participation of all delegates and the vast presence of television and newspaper media.