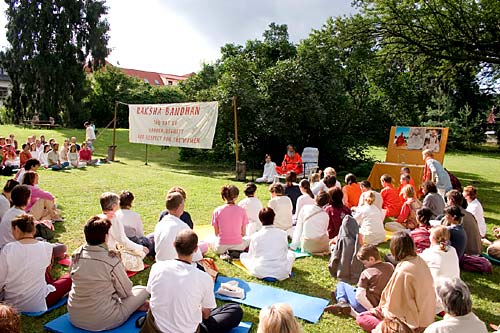 This year's Raksha Bandhan festival was celebrated on August 9th, the Shravana full-moon day. His Holiness Swamiji dedicated this festival to reviving of Honour, Dignity and Respect for Women. In the Upanishads it is said: Matri devo bhavaha – Mother is God. On the holy occasion of Raksha Bandhan we shall take a vow that all Women of the world should be happy.

This is what His Holiness Mahamandaleshwar Paramhans Swami Maheshwaranandaji told at the celebration of Raksha Bandhan, at "Yoga in Daily Life" Summer Seminars, in Mahaprabhudeep Ashram in Strilky/Czech Republic:

Raksha Bandhan is the day of Honour, Dignity and Respect for Women.

The Raksha Bandhan festival shall remind us of brotherhood, unity, ethic principles and spirituality. It is a joyful festival, as all festivals in Hinduism are. Hinduism is known as the religion of joy. Festivals like Raksha Bandhan strengthen the family relations and create happy social relations.

The problem is that nowadays women don’t respect womanhood. They don’t respect themselves as ladies. If they would, men would respect them as well. On that day when ladies will not anymore allow their abuse as commercial objects, as mere photo-models, they will regain their high position and respect as mothers. Fighting for emancipation goes in a completely wrong direction. Women are not there for simple office work. This can men do. Ladies are and should be the root of a family. They are the "home-ministers" and should have a very high position at home. Mutual respect and trust shall rule in a family. It is the mother who educates children. Men are not suitable to educate a small child, this lies in the hands of a mother. Father's duty is to earn money and provide financial existence and comfort for the family. Ladies should not struggle for so-called "equal" positions in the world. In fact they have a higher position than men. In the so-called emancipation they lose both - their dignity at home and their privileges in the world.

This does not mean that women should not get a higher education. At contrary, women should be highly educated and if they have the ability they should study and learn whatever they can. Because only well-educated and learned women are able to offer good education and broad knowledge to their children. What does a woman lose if she stays at home? She loses nothing but gains much! If she works in the office maybe she will have a career for some years, but worldly positions are only temporary. After retirement there is nobody who will care about her. On the other hand, those ladies who stayed at home and prepared the nest of their family, will keep their high respect and position even in old-age. Their children and grandchildren will love them and they will never be lonely and forgotten.

Only women are able to educate our future generations. The future of our countries and of the whole world is lying in two hands: in the hands of women and teachers. Children are the culture of tomorrow. Children are the future of tomorrow. And this future lies in the hands of mothers and teachers. Mothers can protect humanity against drugs, criminality, violence and wars. They can again bring moral and ethic values in human society.

Therefore, women shall wake up. They shall establish a women's union and make a sankalpa to educate their children in a positive and spiritual way. This is the work a mother should do!

Let us come again to the ancient system. "Yoga in Daily Life" is presenting ancient wisdom for modern life.