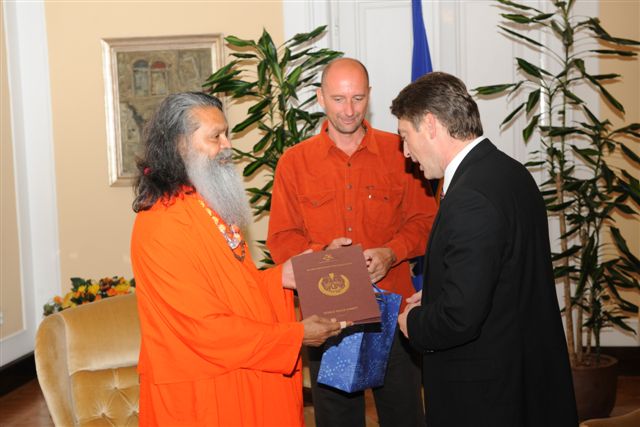 H. H. Swamiji, the author of the worldwide renowned scientific system "Yoga in Daily Life", has been recognized as one of the foremost spiritual teachers and humanitarian workers, UN Ambassador of Peace, who since nearly forty years tirelessly has promoted the idea of living for the benefit of others. Swamiji dedicated his whole life to humanitarian, spiritual and environmental work and his untiring efforts for tolerance and world peace was awarded by social, political and medical dignitaries around the world.

Swamiji has initiated many inter-faith dialogues, prayers for world peace and peace conferences, and has actively participated in many international congresses and conferences. His activities have expanded in many socially beneficial projects, such as drug addiction prevention, care and education for poor children, building hospitals and shelters for abandoned animals, preservation of cultural and archaeological values, and many others. He said, in the present moment, his first concern is the pathway to world peace, in cooperation with counterparts and humanists from all over the world.

His Holiness Swamiji had an extensive and amicable talk with the President. They exchanged in particular their views of a multi-cultural, multi-national and multi-confessional environment as it exists in Bosnia & Hercegovina as well as in India. Tolerance, respect and understanding are the base of a peaceful living together in every community, and especially in such a multi-ethnic situation.

"For me it is a blessing to be in this wonderful country and this beautiful city, among people who really have a great heart and where I have many friends", Swamiji emphasized.

His Holiness Swamiji pointed out in particular that it is essential for the children and young people to learn how to harmoniously and benevolently co-exist and communicate with people of different believes and cultures. Today's youth does not accept dictatorial behavior and commands, but still they need and want to be guided by true authority and competence. It is the responsibility of the political and religious leaders – and in general of every adult to give a good example to the youth, to economize our needs, share our resources, give chances and meet each other with good-will and understanding.

The President stated: "You are an example of how one person can direct a lot of people in a positive direction and I believe that your visit to Bosnia & Heregovina will generate positive energy in all citizens of this country." He added that Bosnia has always been a place of coexistence of different religions and respect for diversity where people have always lived with each other, not next to each other, and that the visit of such a prominent spiritual teacher is another important contribution to the understanding of Eastern philosophy and way of life in Bosnia & Herzegovina. To us in Bosnia & Herzegovina your work and message means a lot because you promote a noble idea throughout the whole world, and we in Bosnia & Hercegovina require noble men and noble ideas." As the highest sign of respect, gratitude and recognition of Swamiji's efforts and outstanding achievements, he handed a gift to this distinguished spiritual master.

At the end of the meeting, the President expressed his appreciation about Swamiji's visit to Bosnia & Herzegovina and granted to His Holiness his heartfelt acknowledgement, friendship and hospitality: "Feel free to come to Bosnia at any time because here you have true friends."