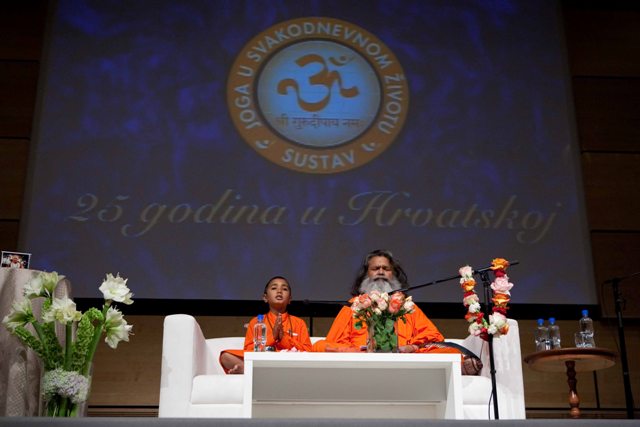 As a part of the regular annual Slovenian tour, His Holiness Mahamandaleshwar Paramhans Swami Maheshwaranandaji blessed his Croatian devotees and Croatia by a one-day visit to Zagreb. After some time, Swamiji again visited Zagreb Sri Devpuriji Ashram and opened new part of the Ashram. The pick point of his short visit to Croatia was lecture “KUMBH MELA - festival of immortality”, which was held 15th June 2010. at 19:00 hours in again full Hypo congress center in Zagreb.
The lecture was as always attended by many distinguished guests and representatives of the Indian Embassy in Zagreb, Croatian Parliament, the Assembly of Zagreb, Zagreb University, religious and non-governmental organizations and media representatives. The event started with a traditional mantra Mangala Charan - Swasti Bachan recited by Swami Avatarpuriđi.
"It is a blessing to remember the ancient wisdom of India and I would like to share with you something about the Kumbha Mela" - were the words by which Swamiji started a lecture on the beginning of creation in the golden age of Satya Juga, on creation of the world, Shiva, Brahma and Vishnu, the descending of holy mother Ganges to the earth and the story that explains how it came to the Kumbha Mela festival, and what this festival of immortality represents and means.
Swamiji explained in simple words how to understand the deeper meaning of Kumbha Mela:
"Meeting of all our senses, mind, consciousness, Atma and Jiva is Kumbha Mela. The vessel (Kumbh) is our body. In us is a constant struggle between Devas (divine qualities) and Asuras (demonic qualities) and what will prevail depends on us.
Before coming to Zagreb, I thought about how to present to you an image of the fight of gods and demons and churning of the ocean and how came out the poison. Then I saw a television report on the oil disaster in the Gulf of Mexico, where nobody can stop the flow of the oil... This is a poison that no one can stop. Also in us lie dormant bad qualities, and by negative thinking we are awakening that poison, which then exits through words, thoughts, actions ... Produce nectar, not poison! "
By this clear explanation and advice Swamiji ended his inspired lecture in Zagreb.
Despite the very short stay in Croatia, Swamiji met with former Croatian President, Stjepan Mesić and His Excellency Mr Pradeep Singh, Ambassador of India to the Republic of Croatia.
The regular annual visit of His Holiness to Croatia is planned in September, when Swamiji will visit Zagreb and other Croatian cities and guide a yoga seminar in Umag.