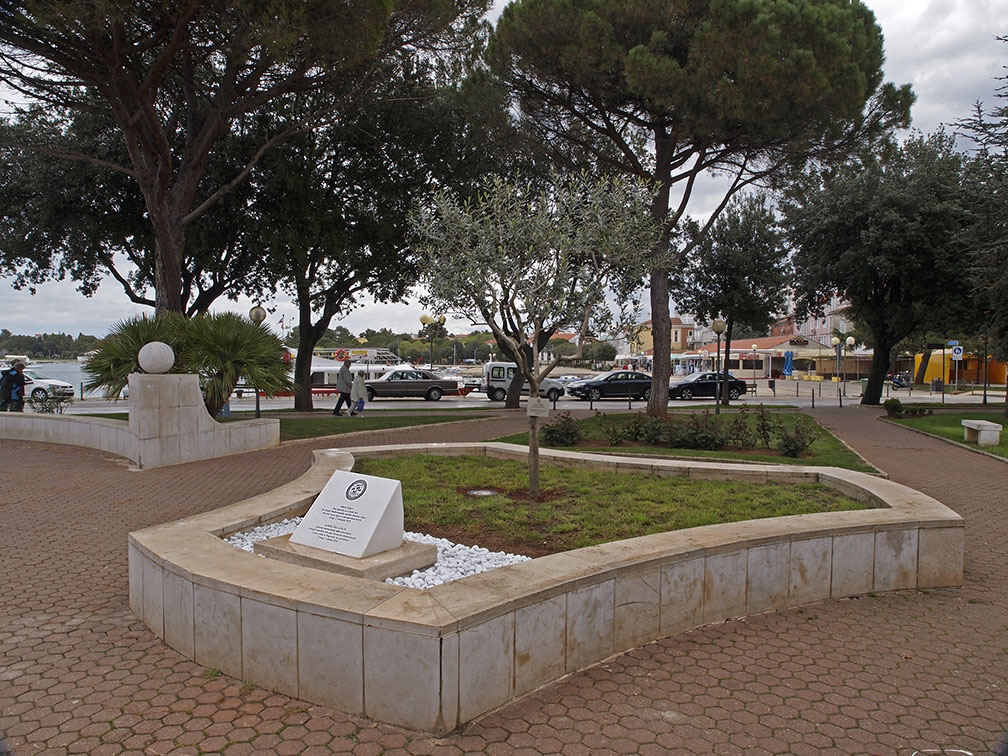 On the April 22 in Umag, Yoga in Daily Life of Croatia celebrated the Earth Day by inauguration a peace memorial stone by the olive peace tree. The ceremony attended The Mayor of Umag, Mr. Vili Bassanese with his assistant Ms. Milena Pintaric, representatives of Croatian and Slovenian associations of Yoga in Daily Life, media representatives and citizens and guests of the town of Umag.
Welcoming present guests, Ms. Marina Frontel, president of Labin association of Yoga in Daily Life, reminded all the present that the olive peace tree in Umag was planted on the October 2, 2010 by His Holiness Mahamandaleshwar Paramhans Swami Maheshwaranandaji, together with Indian Ambassador to Croatia, His Excellency Pradeep Singh, the representative of Croatian president Ph.D. Ankica Marinovic and other distinguished guests and participants of one-day conference "Day of Non-Violence for World Peace," which was held in Umag under the auspices of the Croatian president Mr. Ivo Josipovic. Further on she mentioned that we all are happy to remember that day dedicated to peace, when thousands of participants from the Croatia and other countries were praying for the peace and passing the lighted candles in the sea making that evening full of brightness.
Mr. Bessanese, Mayor of Umag, in his short speech emphasized the importance of such events and expressed his pleasure that the city of Umag is the place where they occur. He noted that the Earth is threatened and that is our common duty to protect the peace and that the olive tree is a symbol testifying to that.
Sadhvi Anand Puri was welcoming all in t he name of the umbrella organization of Yoga in Daily Life, and she has added that this event is continuing the more than decade-long tradition of the peace initiative which began in 2001. The first Peace prayer was held on the coast in Umag and Umag became a historical place for the Yoga in Daily Life so it is no accident that the olive peace tree grows in Umag, in a town which lives in a spirit of tolerance, respect and acceptance of diversity. "The rain that fell this morning abundantly in Umag, is a special blessing of Mother Earth, because we know that the rain is a symbol of a special blessing to all the traditions of the world." – Sadhvi concluded at the end.
Guests were also addressed by Mr. Neven Tomasic, President of the Rijeka Yoga in Daily Life association, and he also reminded that Istria, besides its shape, reminds of India by its multi-religious tolerance.

With chanting of peace mantra memorial stone had been revealed. The program continued at the City Hall; the song "Planet Earth" was performed by members of the YIDL association of Labin, poet Emilija Devic read her poem "A couple of verses for the planet," after which came the film about the system "Yoga in Daily Life" and its international initiatives and the film "Devour the Earth" of the British Vegetarian Society.

This wonderful day in Istria ended the way it should end each day, with satsang in Labin ashram.