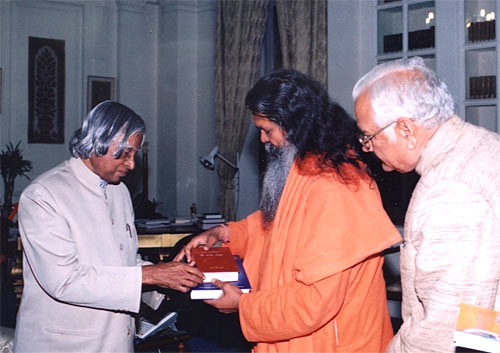 Mahamandaleshwar Paramhans Swami Maheshwarananda arrived at the President's palace in New Delhi at around 1.15 pm. Rain was pouring heavily at the time. Swamiji was accompanied by a group of four people and we were all asked to the waiting room where rules of conduct were explained.

As it is not allowed to bring food to the audience the sweets that we brought were distributed as prasad among our little group. After some time we were asked to the next reception room where again we had to wait for a while. Then the big moment came - the President was ready to receive our "Yoga in Daily Life delegation".

Swamiji entered the President’s great drawing room and was first presented with a basket of fruits as a welcoming gesture by the President. Swamiji laid a white woolen shawl around His Excellency's shoulders, as a sign of respect and reverence by Indian tradition. The President was also given the materials showing Swamiji’s life work and he thankfuly accepted them. After the official photographer took his last photos we were all seated at the tea table.

His Excellency A.P.J. Kalam gave a short welcoming speech in which he conveyed three main points that should be realized:

After President's statement Swamiji talked about his education program, especially the school project in Jadan and the support of children in the Gurukul. His Excellency was very impressed and browsed through the project folder, which he held in his hands during the 45 minute conversation. He also showed great interest for other projects, like the construction of the hospital and the ambulance service, the fire brigade and the Rainwater Harvesting Project.

Later on the President put the following questions to Swamiji and the group:

Why do people start wars?
What is wrong within humans?
What are the roots of aggression?

There was a common agreement that ego, bad habits and qualities, fanaticism and egoism are the cause of wars and aggression. The President formed this conclusion into one sentence: “If you want peace, remove the ‘I’ and the ‘ME’, then hatred will vanish from your mind and body and peace will come."

Swamiji plans his third world-wide peace conference (after Vienna and Sydney) in January 2004 in Delhi and he invited his Excellency to the event, which should be titled Vedic Culture for Sustainable Development and World Peace. Like a good friend the President then advised Swamiji to give the conference a different title to awoke greater interest and attract more visitors. They finally agreed on the title Multi-Civilization for Sustainable Development and World Peace.

His Excellency acknowledged Swamiji’s world-wide charitable activity and his service for humanity for inner and outer peace. He recited the Peace mantra with the English translation from the OM brochure with great enthusiasm and said that if all people would realize this prayer, peace in the world would be guaranteed.

Swamiji recited a poem by Swami Sivananda “Within you is the fountain of Bliss…” after which the President spoke about his encounter with Swami Sivananda.

When His Excellency was young he really wanted to join the army to serve his country as a pilot in the airforce, but because of very strict criteria he just missed the acceptance. He was very disappointed and sad about it. He went to visit Rishikesh and stayed in the ashram of Swami Sivananda. After an evening Satsang, Swami Sivananda invited him and another man to a private conversation. On this occasion he asked him why he was so sad. He then told his story and Swami Sivananda gave him the advice, which the President never forgot. He advised him to read the eleventh chapter of the Bhagavad Gita - “Defeat the defeatism within yourself!” Since then this teaching is with him always and continues to give him new understanding.

He then told further from his life. He grew up in Rameshwaram in South India, his father was Imam and was leading a mosque. The best friends of the family were a catholic priest and a Hindu pandit. The President himself attended Christian schools. This is how he learned early in life about the common teachings of all religions and this experience influenced his further life. On his travels he always carries with him a copy of the Bhagavad Gita and the Koran.

We were all deeply impressed by this audience, which was more a Satsang than a political meeting. We were especially touched by President's simplicity, clear spirit and the thirst for knowledge and spiritual wisdom. He really treated Swamiji with great respect and reverence and praised his work very much.

At the end Swamiji asked for the honour of another audience with his disciples on his next visit to India at the end of 2003 and the President agreed. When we took farewell we expressed our high regards saying that at present India really is governed by a great man.

Swamiji’s meeting with the Indian President is one of the highlights in Swamiji’s life and we, his disciples, congratulate him for this great success and rejoice with him in this great public recognition in his own country. The break through of Yoga In Daily Life as a world-wide instrument for self-education, self-knowledge and also as a peace movement is another important highlight.

In the 30th year since Swamiji started his work in Europe, Mahaprabhuji gave him this wonderful gift.

At the reception with the Indian President