Swamiji participating at the UN World Summit in Johannesburg Mahamandaleshwar Paramhans Swami Maheshwaranandaji participated at the United Nations [World Summit on Sustainable Development] (WSSD) in Johannesburg/South Africa. WSSD brought together tens of thousands of participants, including heads of State and Government, national delegates and leaders from non-governmental organizations (NGOs), businesses and other major groups to focus the world's attention and direct action toward meeting difficult challenges, including improving people's lives and conserving our natural resources in a world that is growing in population, with ever-increasing demands for food, water, shelter, sanitation, energy, health services and economic security.
Swamiji participated at different programmes and below you will find some impressions from his activities and presence at the Summit.

The World Summit on Sustainable Development was held in a part of Johannesburg called Sandton (in the Sandton Convention Centre). This is where government officials from all over the world got together to discuss Type 1 (governmental) initiatives. Non-governmental (NGO) Type 2 initiatives were held in parallel events in different parts of Johannesburg. With over 60,000 delegates, many events happening simultaneously, and very tight security it has been somewhat chaotic at times. Swamiji took part at two global forums at NASREC NGO's venue. He was invited by dr. Timi Ecimovic from Slovenia to speak at the 'Climate change' forum and by Vikram Saravai Foundation to take part at 'A vital connection' forum which was about poverty reduction ans spirituality, with dr. Kamla Chowdry (ecology, degraded lands, deforestation, and watershed) and Jane Goodall (renowned environmetalist and UN Messenger of Peace) as co-speakers. Swamiji also held the 'World Peace and Ecology Meditation Workshop' at NASREC. Water Dome was another NGO's site with the emphasis on water management and preservation. This is where 'Yoga in Daily Life' had their booth with presentation of the Desert Rainwater Harvesting Initiative. An Interfaith Symposium called 'Pathways to Peace' was held at Johannesburg's prestigious Witwatersrand University, organised by the various student unions of the university. Swamiji spoke there as a representative of Sat Sanatan Dharma, along with Bishop Paul Verryn (Christianity) and and Chief Rabbi Harris (Judaism). Swamiji traveled to Durban to meet prof. Fatima Meer. She is one of South Africa’s strongest advocates of peace and a close friend of Nelson Mandela. She was to speak at the Interfaith Symposium with Swamiji but unfortunately suffered a stroke. Swamiji was also invited to the Indian High Commissioner’s house for a reception and cultural evening, where he met the Premier of the Northen Province, Dr. Popo Simon Molefe. Swamiji has been an invited guest to many Ashrams in Johannesburg and Durban and also payed a visit to Rhino & Lions Resort in Durban. 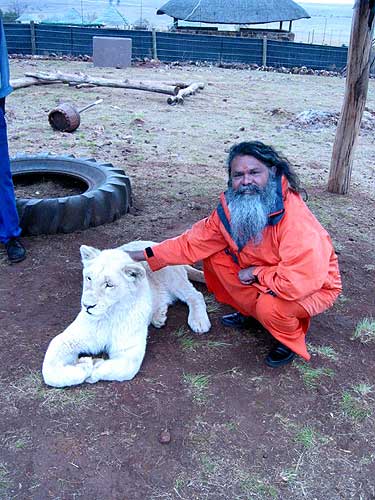