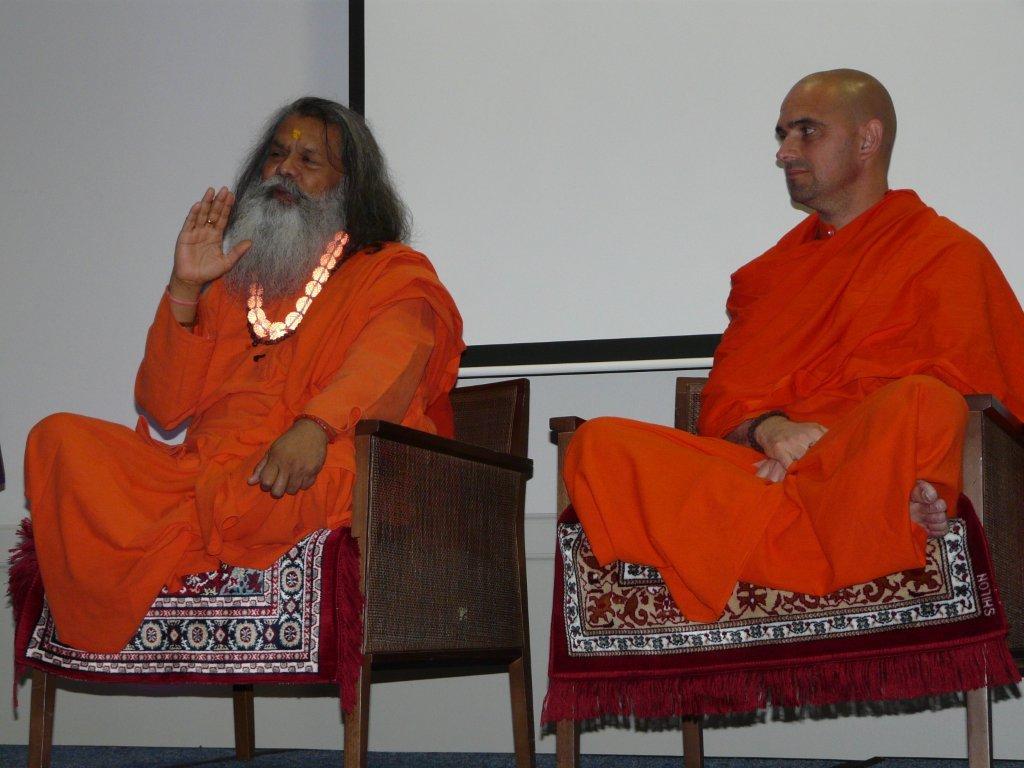 Vishwaguru Mahamandaleshwar Paramhans Swami Maheshwarananda today gave the opening address at the first ever Yoga Australia Conference, held in Melbourne Australia. The conference theme is “In the Spirit of Union” and conference delegates are yoga teachers and students from around Australia. Australia has the highest number of yoga teachers per capita in the world and Yoga Australia has been formed to support the professional development of yoga teachers. The conference will run over 2 days with panel discussions and workshops lead by some of Australia’s best yoga experts.

Vishwaguruji was the only non-Australian invited to speak at the conference, in recognition of his contribution to yoga worldwide and his contribution to yoga in Australia, where he has visited every year for the past 20 years. The conference MC, Mark O’Brien, said that there are 2 million Yoga in Daily Life practitioners around the world and His Holiness is a recognized Ambassador of Peace and a great humanitarian worker. Vishwaguruji was joined on the stage by Mahamandaleshwar Swami Jasrajpuriji.

Vishwaguruji began his address by likening the union of Australian yoga teachers at the conference to an orange with its individual pieces held together by a single skin.  He said that Australia has been blessed by many great yogis, including Swami Satyananda of the Bihar School of Yoga who passed away in 2010, Iyengar and Swami Muktananda of Ganeshpuri. He then went on to describe what yoga is:

"my experience is that of cosmic consciousness – the truth, the light or God – in empty space. Between space and light is a uniting force that balances and unites the whole universe, thousands of sun systems, the stars and the five elements that create the human body and within the body, all organs, systems, muscles, glands, tissues are perfectly balanced and harmonized. We are not only yogis, we are the Yoga!  We are all here as individual souls with different destinies but we are all one in the Atma. Patanjali said ‘Yogas Citta Vrtti Nirodhah’, through yoga practice we learn to control our thoughts but not the mind. The mind is like a river, if you block the river, the river will cause a flood. But you can direct the river with discipline. As Patanjali said ‘Atha yoga ‘nusasanam’, the key to success is self discipline, practice makes perfect”

Vishwaguruji then spoke about the power of words, and how important the words of a yoga teacher are to their students:

“the words we speak, our students take very seriously. When we ask our students to close their eyes, whatever we say goes into the subconscious of the students, you the yoga teacher are the Guru.  Your students trust you and every word you say is very precious to them. Therefore we have to speak carefully. Before I teach, I say the Naham Karta mantra. It means, I am not the doer, God is the doer. When you teach with this attitude, you become God’s channel”

Vishwaguruji finished his address by leading the conference delegates in the Maha Mrityun Jaya Mantra to grant protection to everyone present, and to bless the spirit of union that had brought them all together for the conference.