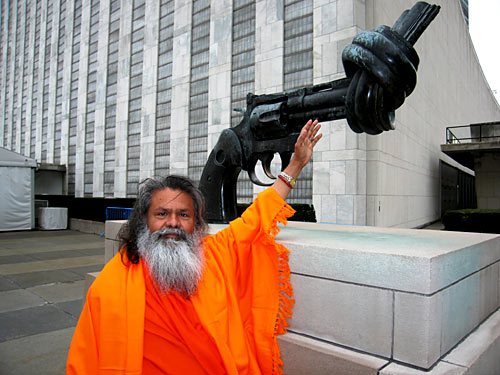 Visit at the UN

His Holiness Paramhans Swami Maheshwarananda was invited by the United Nations in New York City to present His message of Spiritual Awakening for World Peace.

On the evening of April 25th together with Mr. Ramu Damodaran, Chief, Civil Society Services, UN Department of Public Information, Bawa Jain, Secretary General, World Council of Religious Leaders of The Millennium World Peace Summit and Tsu-Wei Chang, Chief, Coordination, Division for the Advancement of Women, Department of Economic and Social Affairs, Swamiji gave a talk and meditation at the UN headquarters.

Mr.Damodaran who opened the event spoke about the importance of Swamiji’s ability to reconcile the loftiness of spirituality with very down to earth practical approaches. He explained how Swamiji has created a Desert Rainwater Harvesting Initiative to help meet the millennium development goals of the UN. These goals include providing sustainable source of fresh waters to the rural communities, to provide further education for the poor and to improve conditions and emancipation of women. These millennium goals are being achieved through skill and spiritual awakening. He especially emphasized Swamiji’s capacity to bring the principles of Sanatan Dharma to the individual lives.

The next speaker, Mr. Jain expressed his deep devotion to Swamiji. He has personally witnessed Swamiji’s unique ability to facilitate building the inner spiritual foundation towards awakening of human consciousness. Once the foundation is strong then it automatically manifests in the external life. According to Mr. Jain for a person who has realized this inner awakening the peace radiates to all. He invited Swamiji to return often to the UN to help build this inner spiritual foundation among the people who are working in their very difficult jobs and requested that he facilitates the week long retreat at the UN headquarters.

Swamiji enhanced the evening with his thoughts on the importance of education, love and spiritual values. He instructed the audience to explore within themselves the question: What makes us human?

Without knowing the value of the human qualities of tolerance, respect, understanding, trust and humility in this human life one cannot understand human rights. When the spirituality is awakened in the human heart, then one can understand more deeply the responsibility towards protecting humanity and nature.

The evening was closed by Ms. Chang who expressed here sincere gratitude to Swamiji and the large international group present. She noted how evident peace was on the faces of those attending the event.

On 26 April 2007, by invitation of Mr. James Janeski, Director and General Manager of the Lott Residence for Seniors in New York City, Swamiji gave a morning Satsang and Yoga demonstration. The large group of senior residents included a youthful woman of 104 years who attends weekly Yoga In Daily Life classes at the residence. Several bhaktas were also present as Swamiji continued with programs in NYC on the initial leg of His Spiritual Awakening for World Peace Tour, 2007.

Swamiji opened His Satsang with a salutation to all from His heart, saying, "I feel blessed by the Cosmic Power to be here in the Lott Residence with you." He spoke of the great wisdom in the group because of their collective experiences in overcoming life's difficulties. Swamiji imparted to the group a sense of continuity and ease as He described how the truth and wisdom of our Self will never die. "The body is like a cloth, we may change the cloth but we are still there", He said in reference to the physical death. Swamiji continued “for the Self, death cannot come. The Self is that radiant Cosmic Light and as long as there is light, darkness will not come near.”

One of the lessons of the morning conveyed to all by Swamiji, was that we should be happy and enjoy while we reside in the physical form, but there is however even more happiness that is everlasting and joyful in other parts of the Cosmos. This comes as the Truth of our being merges into the Cosmic Truth at the time of our passing.

Swamiji encouraged us all to take care of ourselves and be healthy, although He reminded all that health is not everything. Such health only includes the physical and psychic states of wellness. True health lies beyond our physical being in our capacity to participate and appreciate the grand opportunity of being human on this planet. True health comes to us through our efforts to understand the important question: What makes us human? In our effort to understand, we will awaken in ourselves the dormant qualities of love, understanding, forgiveness, giving and warmth, and we will come closer to God.

Swamiji encouraged all towards positive thinking and to never feeling alone. Honouring a request from one of the seniors, Swamiji closed with the Gayatri Mantra and explained that this mantra is spiritually connected with the cosmic resonance and the cause of the entire creation. It is this same connection that fills the void of loneliness.

At the end of Swamiji’s program we were also blessed by the wisdom from the most golden resident of 104 years, Mrs. Cooper, who offered her advice to all, "If you don't use it, you will lose it".

His Holiness Swamiji officialy opened the SNGP Seva Ashram hostel in Vancouver. It's founder Naginbhai Neil Patel intended the hostel to help people "realize their innner strength". The idea is to provide a spiritual shelter for people, especially those who are destitude or unamployed or low-income. And to take them from where they are to a higher level in their life. Rooms cost as little as $6 a night for the truly destitude, through permanent residents who can afford it will pay more than $100 a week. Drugs and alcohol are banned. His Holiness Swamiji offered a prayer for strength and happiness for the ashram's guests and operators. "Through this centre people may find themselves again and lead a normal life", said Swamiji.