The International Day of Yoga (IDY) programs around the world have once again raised awareness of Yoga and its benefits among the wider general public. Thanks to IDY, many people were able to experience Yoga practice for the first time and learn useful techniques for their health and well-being. There has been much positive feedback about the special events and free classes provided by Yoga in Daily Life, both from members of the public as well as yoga aspirants who already practice. And many new people showed interest in attending regular classes, as well as coming to IDY events again next year. See reports from some countries below – more reports can be viewed in articles here and here.

Vép – at the International YIDL Summer Retreat, more than 500 YIDL practitioners from about 10 countries, came together and celebrated IDY on Saturday 22 June. They practiced the Bari Khatu Pranam salutation sequence, as well as other asanas, yoga nidra and nadi shodhana pranayama. 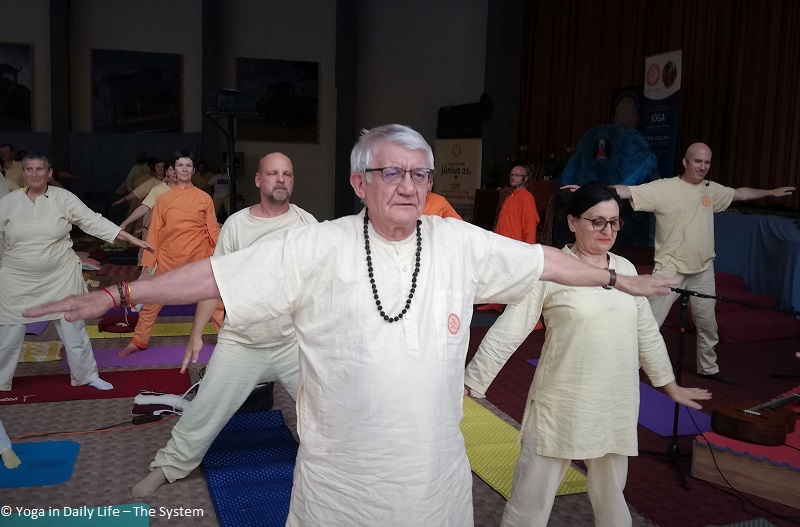 Budapest – on 15 June, satsang and exercises where held together with local Indian families.

Szeged – a 7-day series of programs was performed at the Yoga in Daily Life Center in Szeged for the International Day of Yoga, with sarva hitta asanas ('exercises good for all' from Level 1 of YIDL), pranayamas, yoga nidra, meditation and satsang. At the end of each program was offered a vegetarian bhandara (buffet). More than 150 people participated in the programs 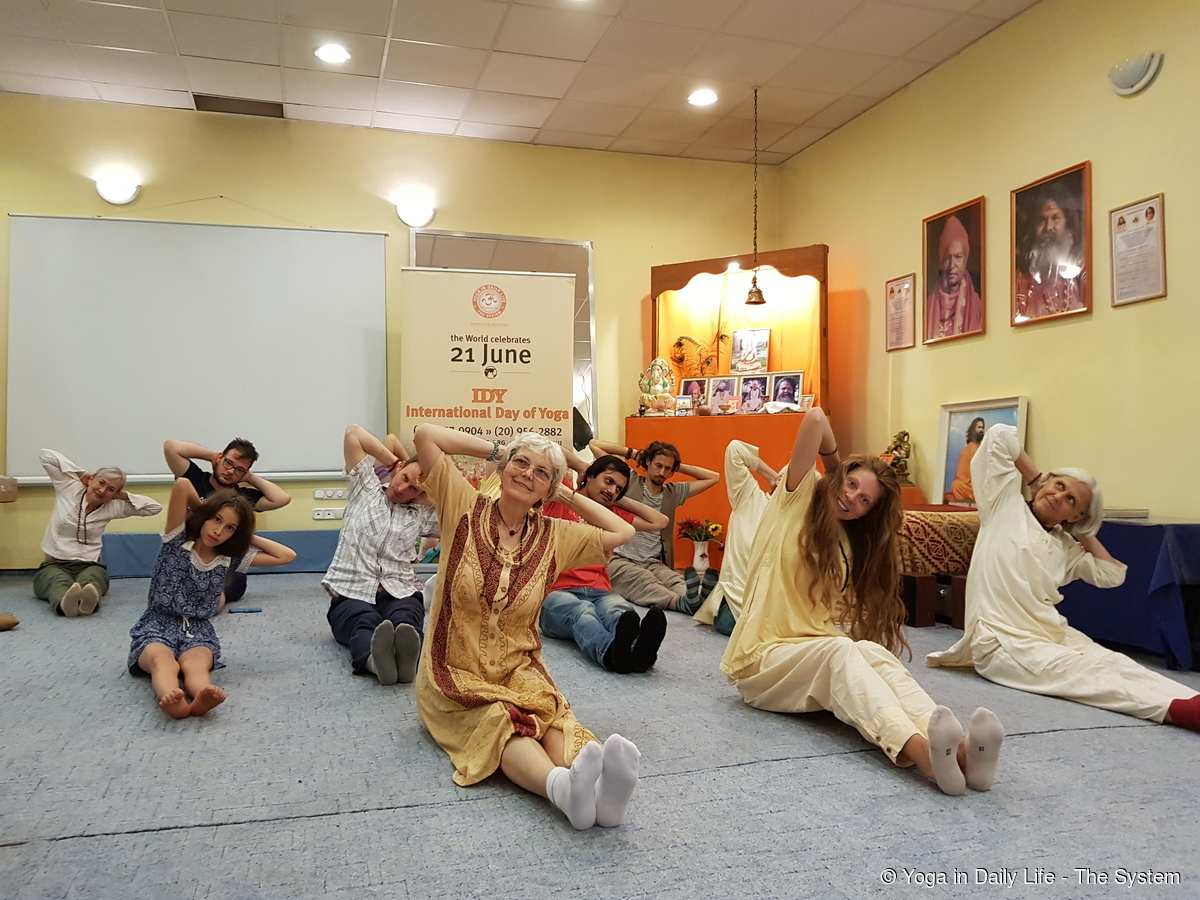 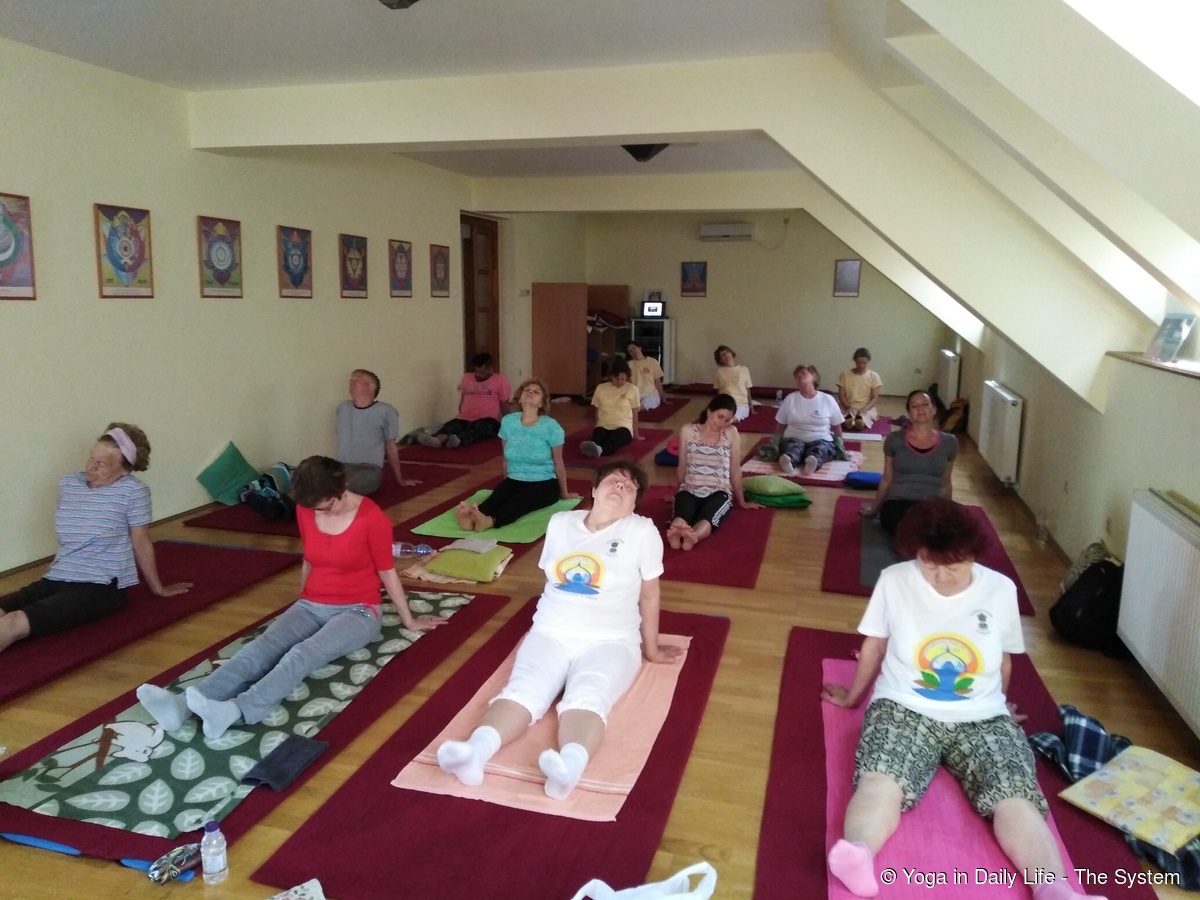 Győr – at Széchenyi István University, the Indian Embassy organized the International Yoga Day events for the fifth time on June 22 and 23. And this year's event commemorated not only the Yoga tradition but also the 70th anniversary of diplomatic relations between India and Hungary.

On Sunday, 16 June 2019, in the Liman Park in downtown Novi Sad, in coordination with the Indian Embassy in Belgrade, YIDL Novi Sad organized an open-air Yoga event. It was an opportunity to bring together 50 practitioners of all generations in a beautiful natural environment. The simple and effective exercises of Yoga in Daily Life®, stretching, strengthening, relaxation and breathing, brought the joy and beauty of yoga to all of us. 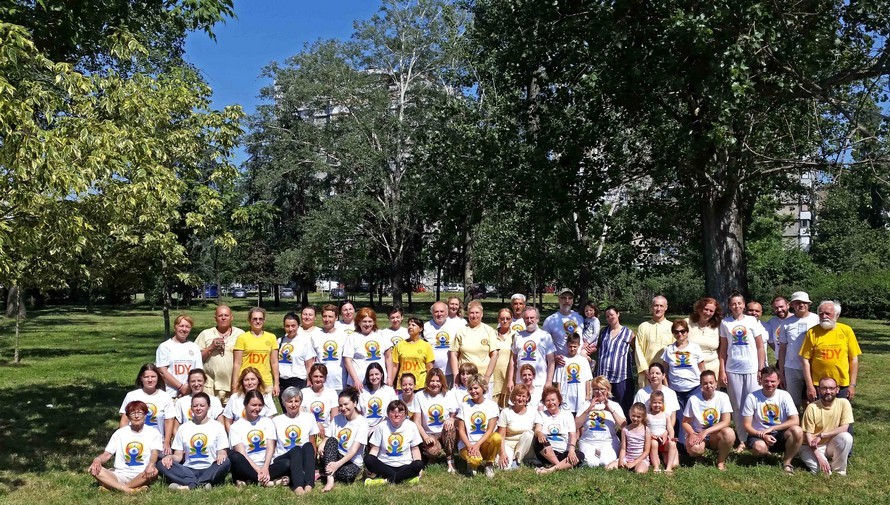 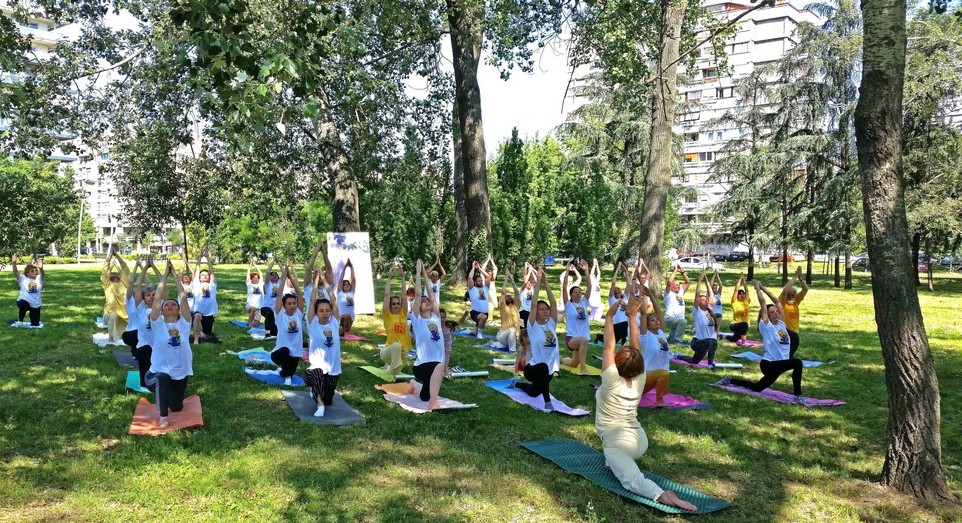 The International Day of Yoga was celebrated and performed in 14 cities throughout Croatia.

On 18 June, IDY was performed with the support of the Indian Embassy in small town Velika Gorica and in the beautiful town of Rovinj on the Adriatic coast.

With great enthusiasm and discipline on the occasion of the International Day of Yoga, a Yoga in Daily Life class was held in the Remetinec Prison too. 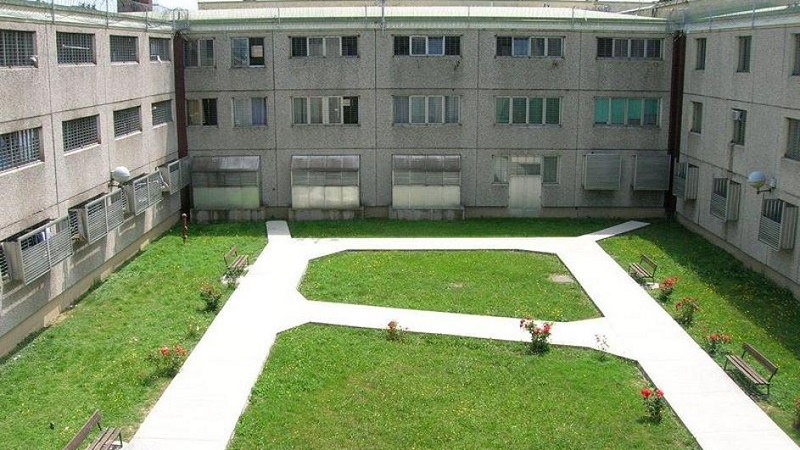 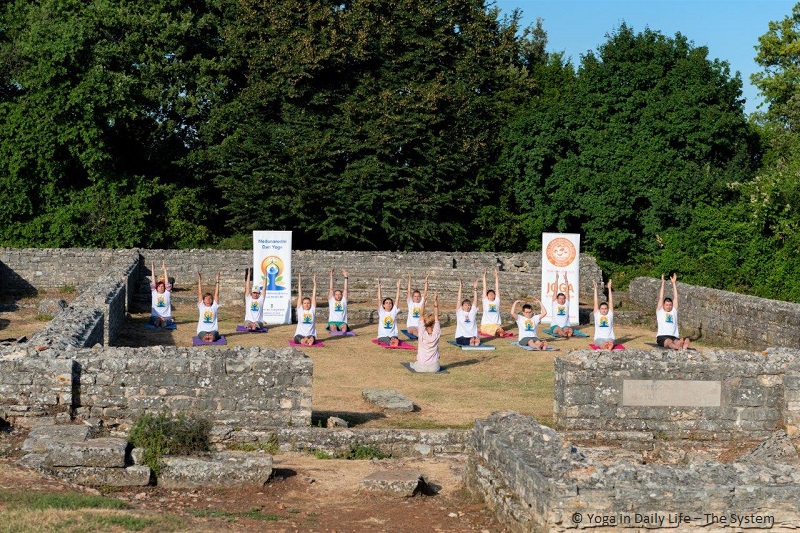 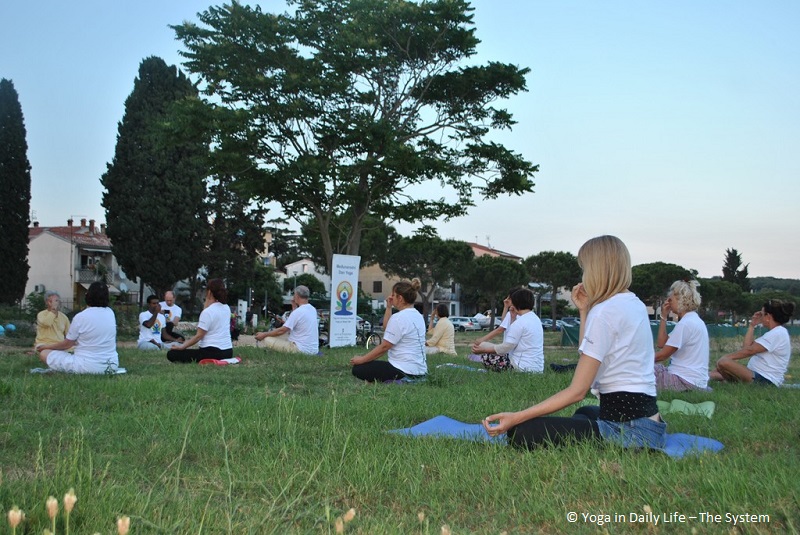 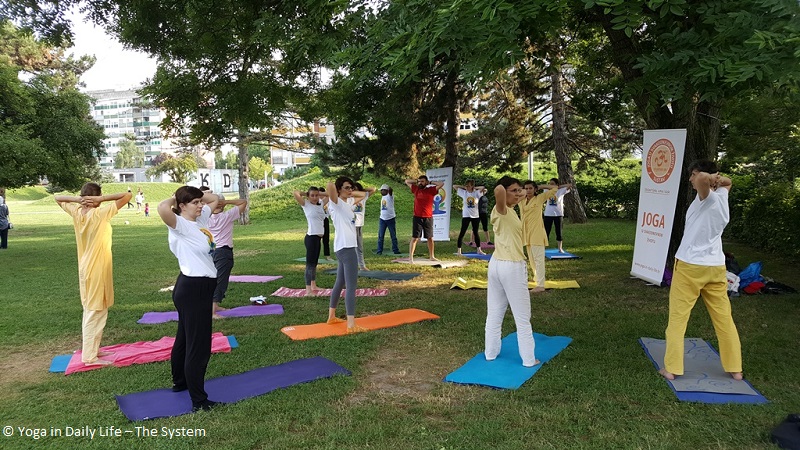 In the Vienna City Park, near the famous monument of Johann Strauss, there was free yoga in the meadow. 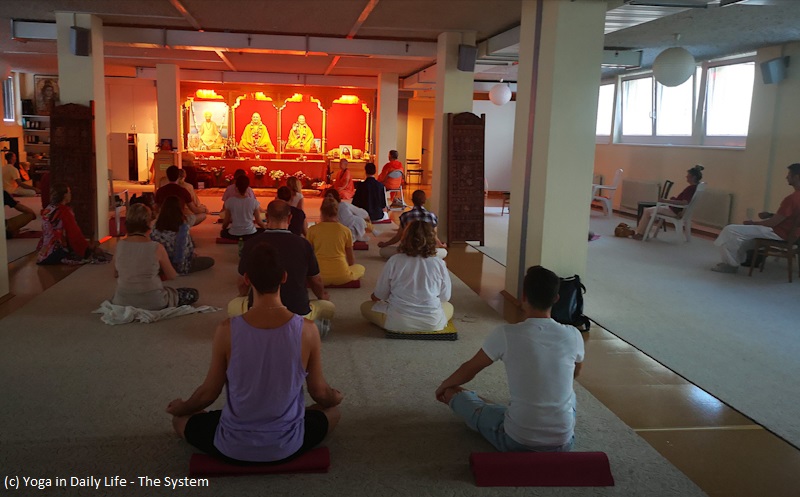 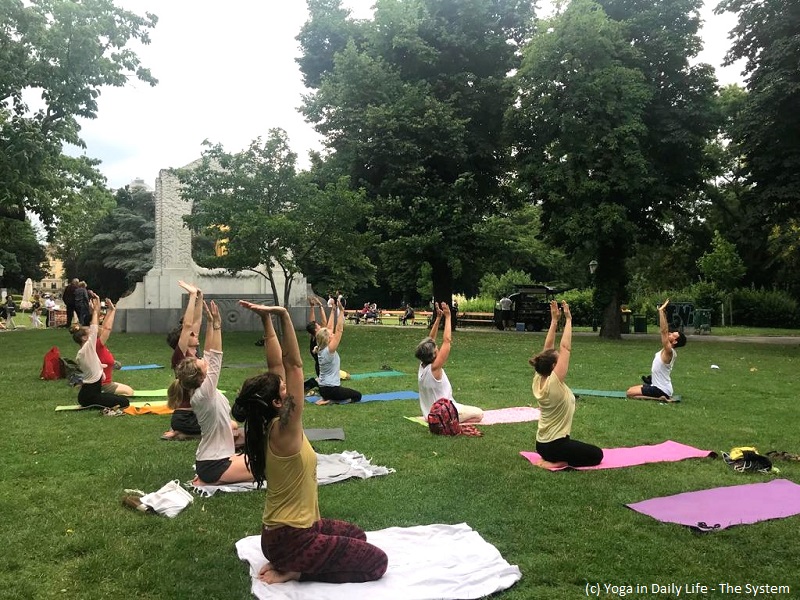 On 16 June, YIDL Linz participated for the 3rd time in the International Peace Path organized by the Linz Peace Academy, near to the World Peace Tree planted by Vishwaguruji which was also visited on this occasion.

Ashrams in India, including Jaipur, Kailash, Khatu and the OM Ashram in Jadan, participated in the celebrations of IDY with yoga classes and meditation for school children and local village people. 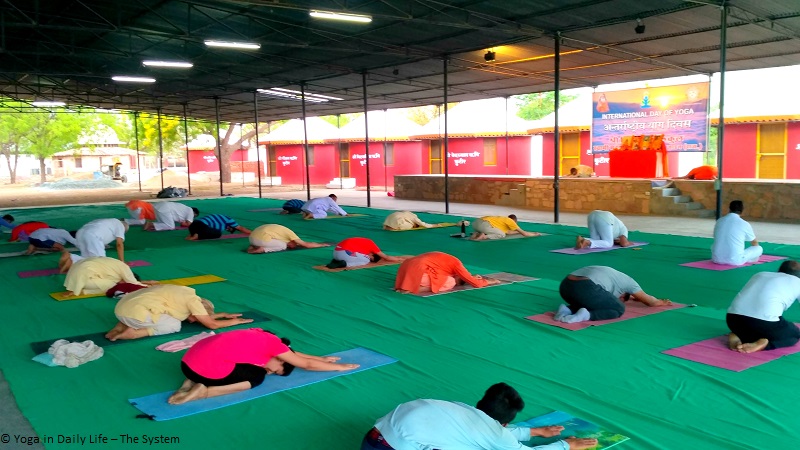 On 21 June 2019, the IDY was celebrated in Cherkasy in the Valley of Roses, together with the Evolution of Consciousness Club and the Hare Krishna ISKCON group. There were different workshops about the YIDL System, hatha yoga kriyas, Bari Khatu Pranam, and a workshop about healthy nourishment according to Yoga and Ayurveda. The event received great interest from people who had not practiced yoga before. Vegetarian food was also provided for all to enjoy after the practice. 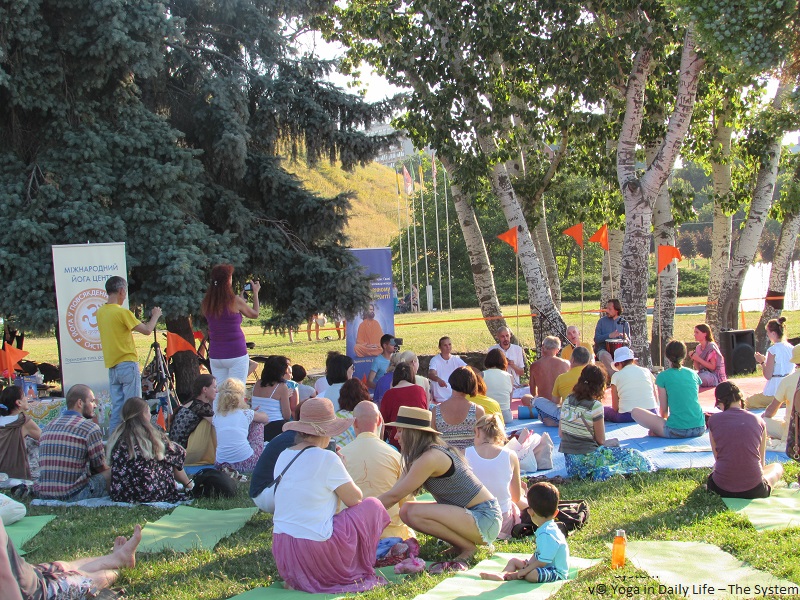 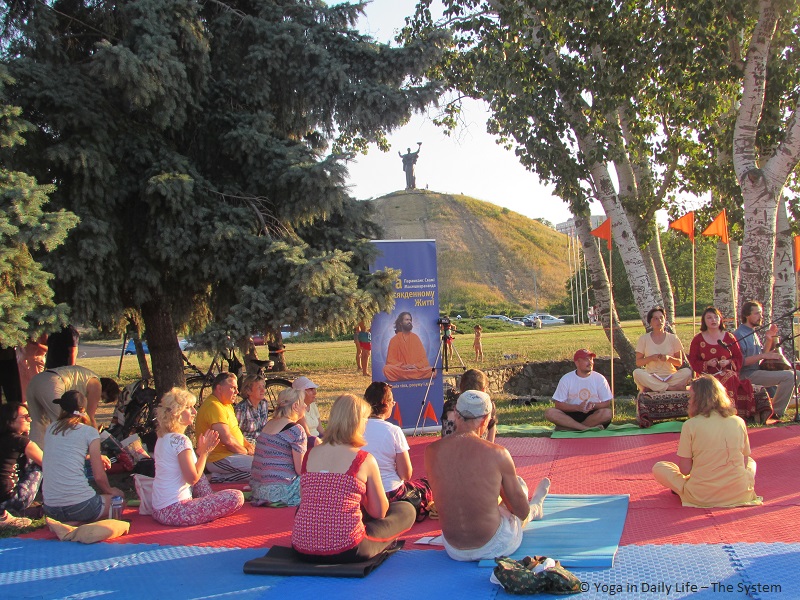 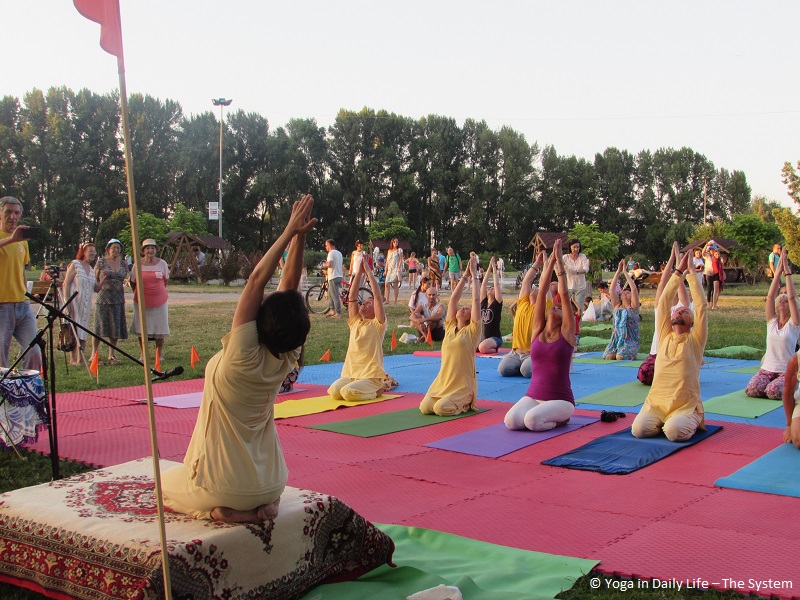 The Association of Yoga in Daily Life in Poland celebrated the International Yoga Day on June 21, in the beautiful Royal Łazienki park in Warsaw. In the evening, there were free yoga classes, attended by 35 people. A lot of positive feedback was received both from the public, as well as from students who had already practiced. 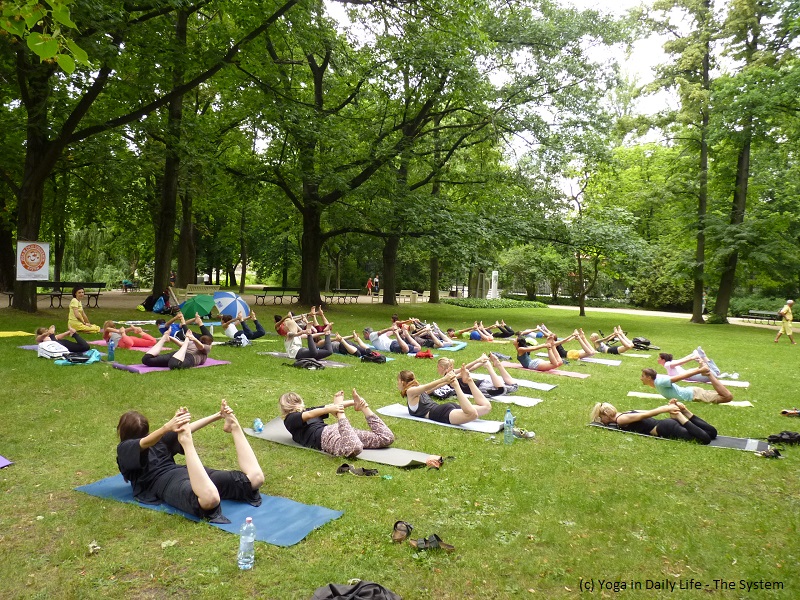 Each year, Yoga in Daily Life Georgia traditionally offers the residents and guests of Tbilisi a whole week of free yoga classes, during the week in which the International Yoga Day falls. This year more than 180 people attended the week of free classes from 17–23 June. There were also some more free events organised for the occasion: an exhibition of spiritual paintings of a visiting Indian painter; Yoga for the Face class; and a lecture about meditation and psychology. The special events were attended by around 120 people.

The main celebration of International Yoga Day was on Saturday 22 June at the Lisi Lake, which is a popular weekend rest area and was visited by many people. Yoga in Daily Life România celebrated the IDY by offering free classes throughout the week in three cities where yoga classes are regularly held – Arad, Pecica and Nadlac.

Friday 21st of June was 'open doors day' in Sri Alakhpuriji Ashram in Nadlac where programs for adults took place during the whole day. Practitioners could experience meditation, yoga nidra, physical exercises, karma yoga, sattvic (healthy balanced) food and could experience the day in the ashram.

On Saturday, the program continued in the central park of the city Arad, where Yoga in Daily Life had a presentation of Surya Namaskara, asanas, Bari Khatu Pranam and exercises with games for children. 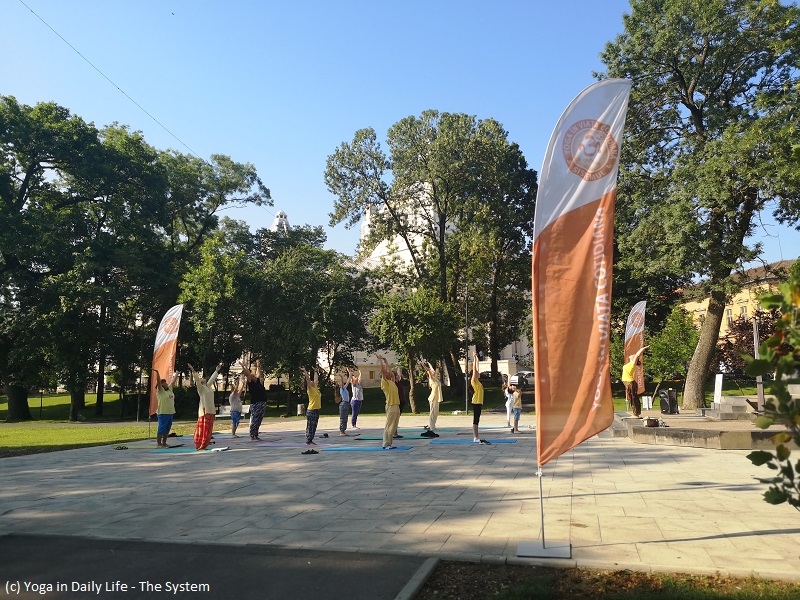 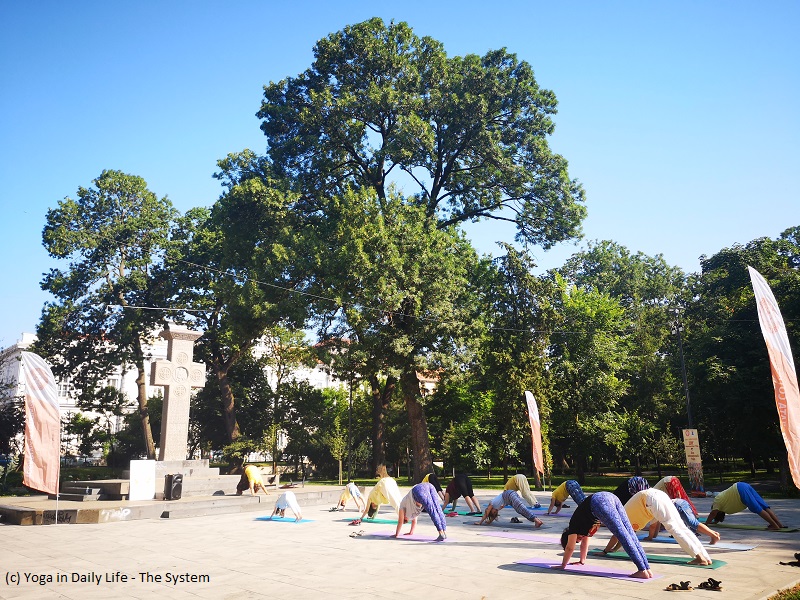 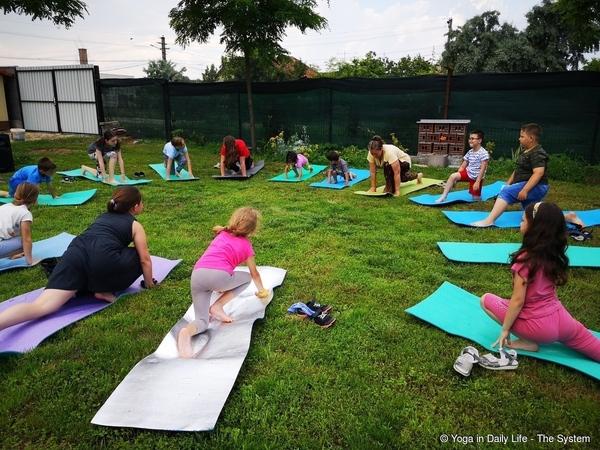 The 5th International Day of Yoga celebration was held in Sarajevo on 15 June at 'Dom Mladih' hall at the Skenderija cultural center. His Excellency Mr Kumar Tuhin, Ambassador of India addressed the participants. Mr. Milan Trivić, Deputy Mayor of Sarajevo, was the Guest of Honor.

IDY was also observed in Mostar at the OKC Abrasevic (Youth Cultural Center). H.E. Mr.Kumar Tuhin also addressed the participants at this event. Ms Sanela Demirovic, Expert Advisor for International Relations, City of Mostar was the Guest of Honor.

In the city of Bihać, Yoga in Daily Life members held a program at the Japodski Otoci park. 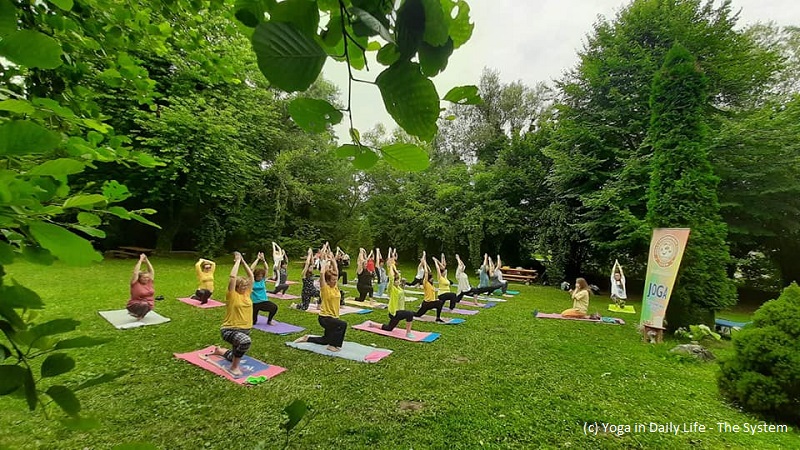 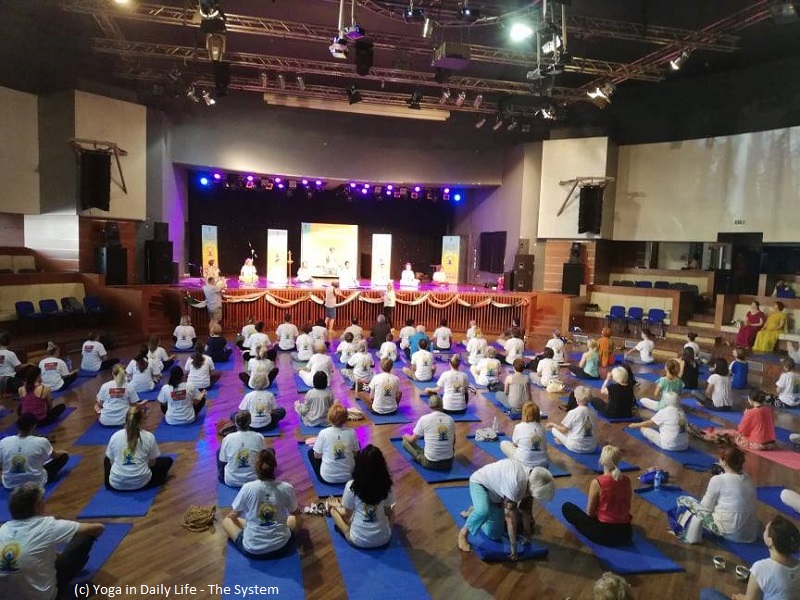 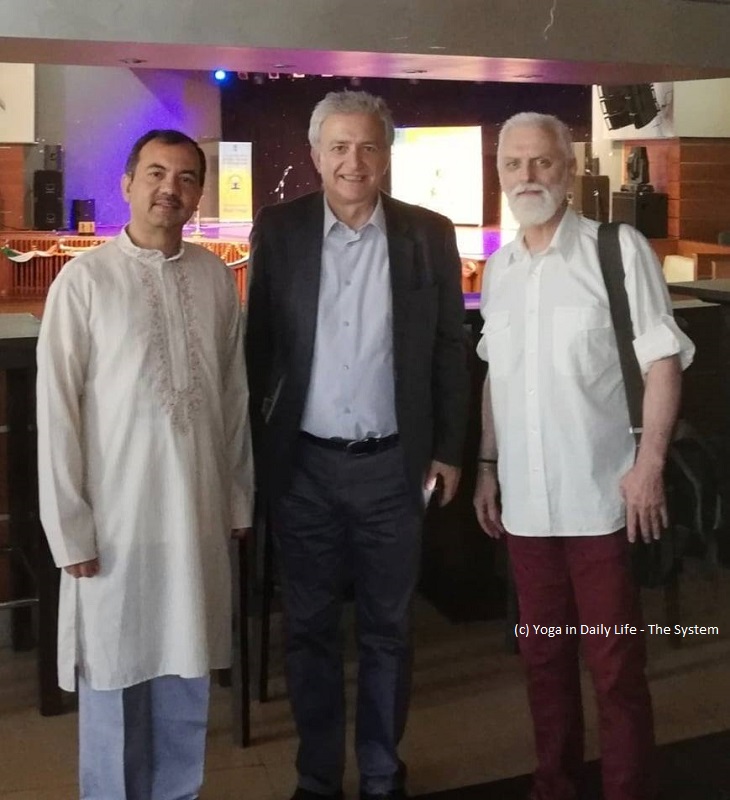