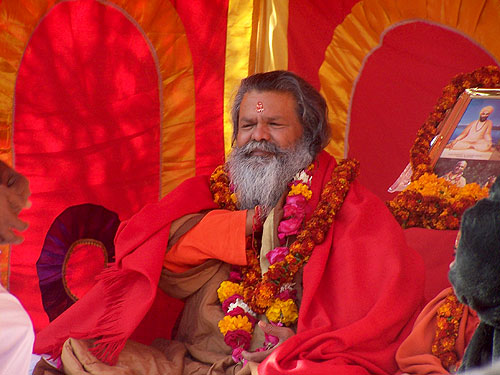 Kumbh Mela - the largest spiritual gathering in the world. According to a legend, the "nectar of immortality" was spilled four times on the face of the Earth from a pitcher (kumbh) argued over by Gods and Demons in a battle that lasted for 12 days in the ancient Vedic times. These four locations are now venues of the festival (mela) which takes place every three years at one of the nectar-spots (Allahabad, Haridwar, Ujjain in Nasik).

This year's festival is the Ardh (half) Kumbha Mela, but despite of its name it still drew millions of spiritual seekers to the confluence of Ganges, Yamuna and mythical Saraswati rivers. Hindu belief has it that one’s sins are purified by a dip in these holy waters, thereby liberating him. This is a time of special astrological constellations and the most auspicious bathing times are known as shahi snans or "royal baths" (January 14 - Makar Sankranti, January 19 - Mouni Amavasya, January 23 - Vasant Panchami and February 15 – Mahashivaratri).

The privilege of leading such baths goes to Akharas (Hindu monastic orders) and their Mahamandaleshwars (akhara leaders). The Maha Nirvani Akhara to which His Holiness Mahamandaleshwar Paramhans Swami Maheshwaranandaji belongs as one of its leaders led the first of the royal baths and His Holiness Swamiji took a holy dip accompanied by his western devotees.

As over 90 million pilgrims are expected to visit Mela during January 3 until February 16, the event is also a huge logistic and security challenge and organizers along with Indian government have made tremendous efforts to provide adequate transportation, lodging, food and safety.

NDTV story on YIDL participation at the Kumbha Mela