His Holiness Swamiji in Slovenia as an Ambassador of Peace 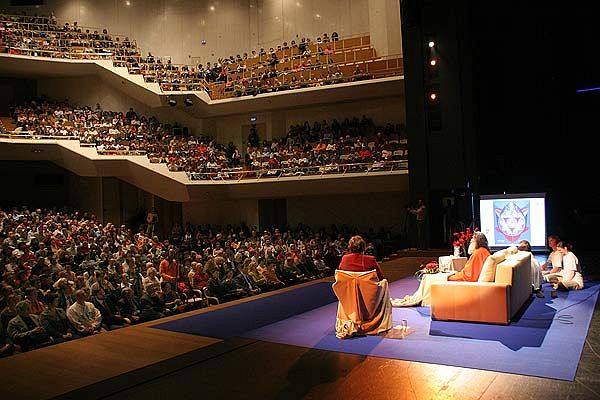 Public lecture by His Holiness Swamiji in Ljubljana

His Holiness Vishwaguru Mahamandaleshwar Paramhans Swami Maheshwarananda is certainly not new to Slovenia. He has been visiting there for the last 19 years and during this time, he has become well known to the Slovene population. His system "Yoga in Daily Life" can now be practised in classes in almost every Slovene city. On Swamiji's first visit to Slovenia in 1988, visitors to his public lecture filled a local cinema hall in the capital Ljubljana. On this last visit, the largest and most prominent hall of the National Cultural Centre was still too small to fit them all in.

His Holiness Swamiji is the tireless driving-force behind countless peace initiatives, inter-religious dialogues, humanitarian care actions, sustainable development projects, environmental preservation and animal protection activities. Due to such activities, which belong to the wider scope of "Yoga in Daily Life" (oneness and equality of all living beings, respect towards the diversity of the world, responsibility of the human race for the welfare of each and every form of life), His Holiness Swamiji is many times addressed as an "Ambassador of Peace".

Swamiji's visit to Slovenia this year began with a public lecture in the capital Ljubljana's renowned Gallus Hall of the national cultural centre called "Cankarjev Dom"”, seating about 1400 visitors. It was filled to the last place and still many remained outside without a seat. The theme of the lecture was the Manipur Chakra, a spiritual energy centre located in the area of the navel, also called the "city of jewels". When awakened, it yields precious qualities ("jewels") such as clarity, wisdom, self-confidence and well-being – all indispensable on the journey of spiritual awakening. Our physical health is also very much dependent on this chakra and its proper function and it is of crucial importance to keep it in proper condition with the help of yogic exercises like Uddiyana Bandha, Agnisar Kriya and Nauli. This event was also organised as a humanitarian action – the total income raised was donated for construction of the "Sri Swami Madhavananda Hospital" in the village of Jadan, Rajasthan, Northern India.

Swamiji's tour continued in Novo Mesto, where he held a two-day international Yoga Seminar with participants from numerous European countries. The theme of the Manipur Chakra was continued and elaborated on in the seminar lectures.

During his stay in Novo Mesto, His Holiness Swamiji was invited to meet the town's mayor, Mr. Alojzij Muhic. The main topic of their conversation was protection of the environment. Both agreed that on Swamiji's next visit they would plant a Peace Tree together in Novo Mesto. Two such Peace Trees were planted in Kranj and Ljubljana in 2006, during the World Peace Summit event held in Slovenia.

At the mayor of Novo mesto

On his return to Ljubljana, Swamiji inaugurated a new "Yoga in Daily Life" centre, located on the outskirts of the city and spanning 1500 m2. The centre was constructed as a joint project of the Yoga in Daily Life Society of Ljubljana in co-operation with the Karate Club Forum of Ljubljana, which will also use the facilities for their activities. Several VIPs attended the inauguration, among them the new Indian Ambassador of India to Slovenia, His Excellency Villur Sundararajan Seshadri, Honorary Consul of Nepal, Mr. Ashwin Kumar Shresta, and the general director of the International Centre for Promotion of Enterprises, Mr. Priyadarshi Thakur.

Inauguration of the yoga centre

His Holiness Swamiji also responded to the invitation of Ljubljana's new mayor, Mr. Zoran Jankovic, and visited him in the Town Hall. Their meeting was affectionate and relaxed; they spoke about several topics, including the question of tolerance and mutual respect, so much needed in today's world. Swamiji presented the success of the last year's World Peace Summit held in Ljubljana and the mayor extended an invitation that Ljubljana could again host such an event in 2008. The impact of such a Summit could be even greater due to the fact that Slovenia will then preside over the European Union, where the principles of inter-religious and multi-cultural dialogues are highly important.

At the mayor of Ljubljana