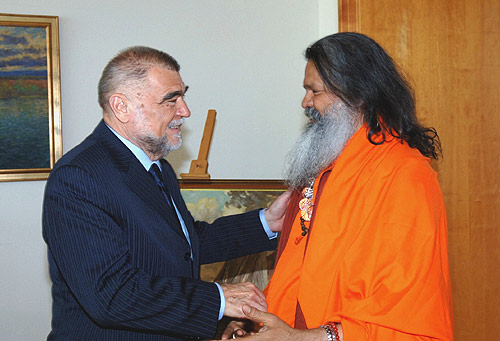 His Holiness Swamiji started His four-day visit to Croatia with meeting Croatian President Stjepan Mesic in his office on Thursday, April 19. President Mesic accepted Swamiji's invitation to participate in the 6th World Peace Summit organised in Slovakia by the ”Sri Swami Madhavananda World Peace Council“. The Summit will again gather representatives of states and governments, NGOs and scientific circles from all over the world. Swamiji and the Croatian President spoke together for almost one hour in a very congenial atmosphere. Swamiji introduced President Mesic to programmes pertaining to youth development, concentration and stress reduction techniques, which are practised worldwide in order to prevent tragic events as took place recently in the USA. In light of discussions about activities in the sphere of world peace and multiculturalism, the 100th anniversary of the Satya Graha movement of Mahatma Gandhi was especially focused on during the meeting between the President and Peace Ambassador. The Croatian President asked about progress of the school in Jadan and construction of the Om Ashram and has promised to pay a return visit to Jadan Ashram during his next stay in India, in 2009.

On Thursday evening, His Holiness held a public lecture before a capacity audience in The Westin Hotel in Zagreb. He spoke about the Anahat Chakra, the centre of love and compassion. This subject raised the interest of so many people that tickets for Swamiji's lecture ”sold like hot cakes“ in just a few days. For almost a thousand people, some of whom remained in the entrance hall, there were special screens installed to make it possible for those who did not have the opportunity to enter the hall to enjoy Darshan and Guru Vakya. Among many distinguished guests, was the Indian Ambassador in Croatia, His Excellency Rajiva Misra, who welcomed the guests in the Croatian language. He spoke with great respect about Swamiji as the promoter of Indian culture and spirituality and the universal love message of tolerance, peace and understanding among human beings regardless of their skin color, cultural inheritance or religious tradition from which they come.

H.H. Swamiji finished His stay in Croatia with a three-day seminar in Umag, on the Adriatic coast, continuing with inspiring lectures on the same subject - “Spiritual awakening – Anahat Chakra”.

For all participants of the seminar, the full experience of living and practising yoga, pranayam, and meditation and listening to lectures, was completed with long walks in the beautiful Istrian countryside.

... “This human life is that tree under which you can fulfil all your wishes. When the heart centre is awakened, then your Sankalpa Shakti becomes strong and whatever you wish from your heart will come true. That is why the seat of Divine is in the Anahat chakra and awakening of this centre is a blessing for us.”