Impressions from the 2010 Slovak Tour

In the Eastern part of Slovak Republic in the Humenne city, surrounded by the picturesque country and nature, weekend seminar of the System Yoga in Daily Life with the honourable presence of His Holiness Paramhans Swami Maheshwarananda took place, attended by many disciples and friends of yoga from various countries of the world.
At the occasion of Swamiji´s visit to Humenne city an audience was given by the Mayor of the city Humenne Dr. Vladimir Kostilnik at the historical castle, at the presence of HH. Paramhans Swami Maheshwarananda, the former Minister of Defence of Slovak Republic Mr. Pavol Kanis, the President of Slovak Union Yoga in Daily Life Mr. Allan Dudinsky and the honourable guests from India. Swamiji was awarded by the Memorial Silver Medal by the Mayor of the city and He made an celebrator notation to the City Chronicle of Humenne.
The Audience was followed by the Peace Tree Planting in the Park of the Freedom , where the act of the planting of the Peace Tree was performed by H.H. Swamiji and the Mayor of the city Humenne. A public lecture in the House of Culture was a part of the seminar, followed by the chain of public lectures after the seminar in the cities of Kosice, Spisska Nova Ves and Poprad.
An inseparable part of the seminar was the beautiful nature of the highest mountains of Slovakia– the High Tatras, visited and enjoyed by H.H. Paramhans Swami Maheshwarananda and His disciples and friends. 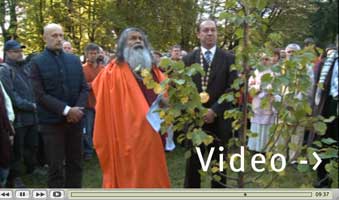 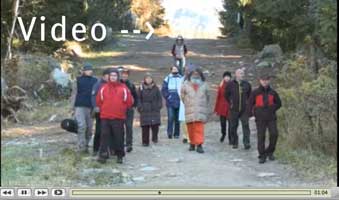 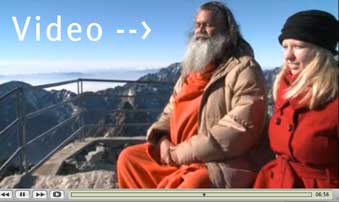