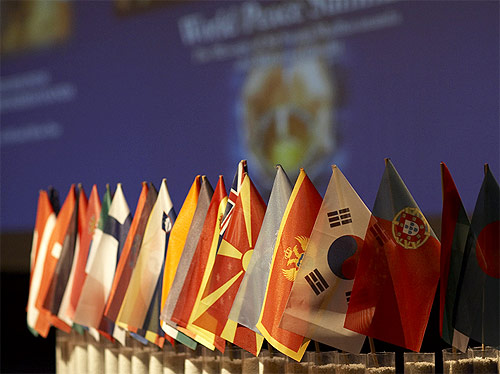 From October 13 to 15, Ljubljana, the capital city of Slovenia, hosted the World Peace Summit 2006. Already the fifth such event, on this occasion it was organized by the Yoga Union of Slovenia under the patronage of the Mayor of Ljubljana, Ms. Danica Simsic.

The World Peace Summit is an annual meeting of people of good will, endeavouring for world peace, tolerance, equality, sustainable development and a better attitude towards fellow living beings and the environment. The initiator of this important international event is His Holiness Vishwaguru Mahamandaleshwar Paramhans Swami Maheshwarananda, founder of the Sri Deep Madhavananda Ashram Fellowship and author of the Yoga in Daily Life system.

The Summit's venue was Slovenia's largest congress and cultural centre "Cankarjev dom" (named after the famous Slovene writer) which can accommodate up to 1400 visitors. With some extra chairs added it was just able to accept all who came to witness the historical event. They came from all over the world, the highest representatives of states, distinguished guests, representatives of civil society, religious communities, environmental organizations, business people, scientists, educators, artists, members of Yoga in Daily Life, people of Slovenia, etc., attending as speakers, contributors and visitors who made a stand for peace.

The festive opening took place on October 13, with a humanitarian multicultural concert called "Peace in Your Hands", which featured accomplished artists from around the world. The entire proceeds of the concert (as well as the Summit itself) will be used to support education programmes for women in Rajasthan/India.

October 14 was a conference day with discussions of the main topics related to Summit's initiatives. It began with solemn signing of the Summit's Peace Resolution. The first signatories were the Mayoress of Ljubljana, Ms. Danica Simsic and the initiator of the World Peace Summit, His Holiness Vishwaguru Mahamandaleshwar Paramhans Swami Maheshwarananda. They were joined by: Lama Shenpen Rimpoche, representative of the Buddhist Dharmaling congregation; Father Fergus Capie, from the London Inter Faith Centre; Ms. Magdalena Tovornik, envoy of Dr. Janez Drnovsek, the President of the Republic of Slovenia; Mr. Budimir Loncar, Special Advisor for International Affairs to Mr. Stjepan Mesiæ, President of Croatia; Sri Laxmi Narayan Dave, Minister of the government of Rajastan/India, Mr. Shri Gulab Chand Kataria, Minister of the government of Rajastan/India; His Excellency Ranjit Rae, ambassador of the Republic of India; Mr. Bawa Jain, Secretary General of the World Council of Religious Leaders at the Millenium World Peace Summit of Religious Leaders; Mr. Ramu Damodaran, representative of the United Nations; and other distinguished guests of the World Peace Summit.

Peace candles were symbolically lit by representatives of different religions. The participants of the World Peace Summit were greeted by the Mayoress of the Slovenian capital, Ms. Danica Simsic, and special letters of support from the presidents of Slovenia, Croatia, Macedonia and Bulgaria were read. The Summit continued with speeches by distinguished guests from Slovenia and abroad.

Special emphasis was given to the role of young people in shaping of the future world. The World Peace Summit expressed strong support for the Millennium Development Goals of the United Nations to be achieved by 2015: world peace, respect for and understanding of all cultures and religions, ethical principles, care for the younger generations, and sustainable development. The purpose of the Summit is to spread and support for these goals, as well as the principles of the Earth Charter, Mahatma Gandhi's message of non-violence, respect and peace, and the message of His Holiness Dharamsamrat Swami Madhavananda, "One in all and all in one." for the achievement of unity and peace. It is an encouragement to all world leaders to unite their efforts towards lasting world peace, to show tolerance, respect and understanding and acknowledge the power of "unity in diversity".

During the break, the guests of honour planted a Peace Tree just outside the Summit venue, as a lasting memory and a reminder for the joint endeavours towards peace in the world.

This unique event concluded on October 15, with the General Assembly of the Yoga Union of Slovenia in the honoured presence of His Holiness Mahamandaleshwar Paramhans Swami Maheshwarananda.

A special feature of the conference was a live internet video broadcast of the entire proceedings. People from all over the world could join in and be a part of the Summit, although not present in Ljubljana. One more proof that there are no limits for peace!

His Holiness Mahamandaleshwar Paramhans Swami Maheshwarananda announced at the end of the Summit that the next event of this kind will take place next year in Bratislava, the capital of the Republic of Slovakia.